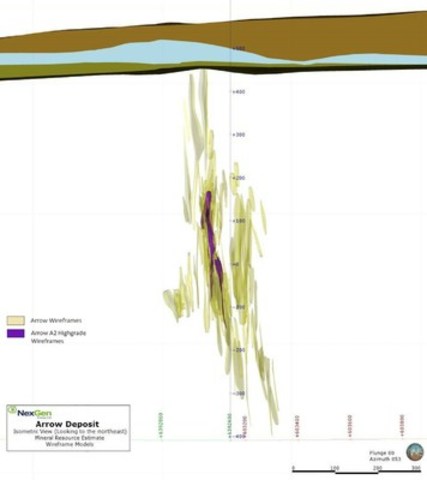 Rapid Conversion of Inferred to Indicated:

Garrett Ainsworth, Vice-President, Exploration and Development, commented: "Infill and expansion drilling at Arrow in 2016 has been highly successful with 89% of the Maiden Inferred Mineral Resource converted into Indicated Mineral Resource and a significant expansion of the A2 High Grade Domain. The strength of continuity across the mineralization is a solid signature of the Arrow deposit and a function of the high conversion rate. Additionally, a new A3 High Grade Domain has been identified and is in the early stages of definition. Further, the footprint of Arrow increased significantly with multiple new shears and zones being defined. There remain multiple large, high priority untested areas at Arrow including southwest and northeast along strike with material future resource growth potential. The collaboration between NexGen and RPA has resulted in a high quality Mineral Resource estimate that is industry leading for basement-hosted uranium deposits in the Athabasca Basin."

Leigh Curyer, Chief Executive Officer, commented: "Today's updated Mineral Resource places the Arrow Deposit into a class of its own with respect to grade, resource size, and given the fact its setting is land-based and basement-hosted. The really exciting part is that Arrow remains in the very early-stages of definition. Results issued most recently on February 23, 2017 that are not included in today's resource update, together with the 180 m gap area and multiple untested areas demonstrate many years of drilling remain ahead of the Company before the true extent of Arrow can be determined. As we look ahead to 2017 and beyond, we are committed to our goal of developing the Company into becoming the world's leading supplier of mined uranium."

A replay of this conference call will be available until Monday April 3, 2017. The playback numbers are:

The high-grade, basement-hosted Arrow Deposit was discovered in February 2014, and has rapidly grown into the largest undeveloped uranium deposit in Canada. Arrow is hosted entirely within basement rocks, and currently comprises a series of 5 parallel stacked sub-vertical mineralized lenses with a remarkable vertical extent. At its highest point, mineralization reaches the sub-Athabasca unconformity approximately 105 m below surface. The Mineral Resource reported herein extends to a depth of 970 m below surface. Wide spaced drill holes beneath the Mineral Resource have intersected mineralization at depths of up to 980 m below surface. The deposit as defined in the Mineral Resource estimate has an overall strike length of 875 m, and the individual lenses vary in thickness from 1 m to 20 m.

The Rook I Property is located along the southwestern edge of the Athabasca Basin, straddling the Athabasca/basement unconformity. Basement rocks beneath the Athabasca Group belong to the Taltson Domain (previously Lloyd Domain) and consist of northeast trending Archean and Aphebian granitic and metasedimentary gneisses, the latter containing graphitic pelitic and semipelitic gneisses and granofels, which are favourable host rocks for uranium mineralization. Unconformably overlying the basement rocks are flat lying sandstones with conglomerate horizons that make up the mid-Proterozoic Athabasca Group. The thickness of the Athabasca Group varies on the property between 0 and 20 m. In the western part of the Rook I property, remnants of Devonian sandstones are occasionally seen in drill core overlying basement rocks and Athabasca Group. These are locally overlain by flat lying Cretaceous Mannville Group mudstones, siltstones and sandstones with minor sporadic coal horizons. Recent unconsolidated sandy glacial deposits are present over almost all of the property and vary in thickness from to 60 m.

Uranium mineralization at Arrow occurs within and proximal to structurally prepared basement rocks (graphitic mylonites) that show varying degrees of clay, chlorite, and hematite alteration. Structures have been reactivated multiple times, and five main parallel structural zones (namely the A1, A2, A3, A4, and A5 shears) have been recognized, with the A2 and A3 Shears hosting higher grade, thicker and more continuous mineralization than the others thus far. Mineralization consists predominantly of uraninite/pitchblende that occurs as massive to semi-massive accumulations, foliation controlled, mineral replacements and disseminations. A continuous zone of higher grade mineralization in the A2 shear is known as the A2 High Grade Domain.

The updated Arrow Deposit Mineral Resource is defined by a total of 200 diamond core drill holes. The drill hole spacing for Indicated Mineral Resource is approximately 25 m x 25 m, and hole spacing for Inferred Mineral Resource is approximately 50 m x 50 m. All of the core collected is NQ sized (47.6 mm diameter). Mineralized intervals (defined as greater than 500 cps using handheld RS-120 scintillometer) were split on-site in 0.5 m and 1.0 m intervals and transported by company personnel to SRC Geoanalytical Laboratories (an SCC ISO/IEC 17025: 2005 Accredited Facility) of Saskatoon for geochemical analysis and U3O8 assay. Most samples were analyzed using ICP-MS (Inductively Coupled Plasma - Mass Spectrometry) for trace elements after partial and total digestions, plus ICP-OES (Inductively Coupled Plasma - Optical Emission Spectrometry) for major and minor elements after a total digestion, and fusion solution of boron by ICP-OES. All mineralized samples for assay were analyzed for U3O8 by ICP-OES. Select samples were also analyzed for gold by fire assay. Analytical results were only accepted after stringent internal QA/QC criteria had been passed. All grade data used in the Mineral Resource estimate were obtained from chemical assays, and no down-hole radiometric probe data was used.

Mineral Resources were estimated by NexGen and reviewed and audited by Roscoe Postle Associates Inc. (RPA), an independent consulting company with substantial experience completing uranium Mineral Resource estimates in the Athabasca Basin, and around the globe. The interpretation of the three-dimensional mineralized lenses (domains) was created in Leapfrog software, directly from the drill hole data using a threshold of 0.05% U3O8. All wireframes were then exported to Vulcan software to ensure wireframes were "snapped" to the drill holes to ensure that the boundaries accurately correspond to selected drill hole intervals. Five high grade portions of the deposit were modelled in the A2 shear and two high grade portions of the deposit were modelled in the A3 shear. All higher grade wireframes were based on a threshold of 5.0% U3O8. The higher grade wireframes are located within and completely encompassed by a 0.05% grade shell within the A2 and A3 shears. Figure 1 is an isometric cross section of the wireframes. Drill hole assay data were composited to 1.0 m lengths within the wireframes and tagged with the corresponding domain code.

Uranium (as U3O8) grades were interpolated with an ordinary kriging (OK) function for the A2 high grade and the A2 low grade enveloping domain. All other uranium grades (as % U3O8) were interpolated using ID2 (inverse distance squared). All uranium grades were interpolated into a block model with blocks measuring 4 m (along strike) x 4 m (down dip) x 4 m (across strike), with sub-blocks to a minimum of 1 m x 1 m x 1 m. The grade shells were used as hard boundaries, such that only drill hole data inside of any given domain could inform the blocks within that domain. Very high grade assay values were capped at 40% U3O8 within the A3 High Grade Domain and grade caps ranged from 8% to 25% U3O8 in the lower grade domains.

A total of 5,647 bulk density measurements have been collected on drill core samples. The measurements show a strong relationship between uranium grade and density at the Arrow deposit, with higher grade samples being more dense than lower grade samples. Therefore, the uranium grade was used to estimate the density of samples without density measurements, this was done with a polynomial formula which is based on a regression fit. Densities were then interpolated into the block model to convert mineralized volumes to tonnage, and were also used to weight the uranium grades interpolated into each block.

The resulting block model was validated by visual inspection, volumetric comparison, swath plots, and block grade estimation using an alternative method. As well, the mean block grade at zero cutoff was compared to the mean of the composited assay data to ensure no global bias.

The Mineral Resource Estimate was audited and accepted by Mr. Mark Mathisen, C.P.G., Senior Geologist at RPA and Mr. David Ross, P.Geo., Director of Resource Estimation and Principal Geologist at RPA. Both are independent Qualified Persons in accordance with the requirements of National Instrument (NI) 43-101 and they have approved the disclosure herein. Additionally, the technical information in this news release has been approved by Mr. Garrett Ainsworth, P.Geo., Vice President - Exploration & Development for NexGen. Mr. Ainsworth is a qualified person for the purposes of NI 43-101 and has verified the sampling, analytical, and test data underlying the information or opinions contained herein by reviewing original data certificates and monitoring all of the data collection protocols.

A Technical Report co-authored by Mr. Mathisen and Mr. Ross will be filed on SEDAR within 45 days of this news release.

NexGen is a British Columbia corporation with a focus on the acquisition, exploration and development of Canadian uranium projects. NexGen has a highly experienced team of uranium industry professionals with a successful track record in the discovery of uranium deposits and in developing projects through discovery to production. NexGen's goal is to become the world's leading supplier of mined uranium.

This news release contains "forward-looking information" within the meaning of applicable Canadian securities legislation. "Forward-looking information" includes, but is not limited to, statements with respect to the activities, events or developments that the Company expects or anticipates will or may occur in the future, including, without limitation, planned exploration activities and the completion of an updated mineral resource estimate. Generally, but not always, forward-looking information and statements can be identified by the use of words such as "plans", "expects", "is expected", "budget", "scheduled", "estimates", "forecasts", "intends", "anticipates", or "believes" or the negative connotation thereof or variations of such words and phrases or state that certain actions, events or results "may", "could", "would", "might" or "will be taken", "occur" or "be achieved" or the negative connation thereof.

Forward-looking information and statements also involve known and unknown risks and uncertainties and other factors, which may cause actual events or results in future periods to differ materially from any projections of future events or results expressed or implied by such forward-looking information or statements, including, among others: negative operating cash flow and dependence on third party financing, uncertainty of additional financing, no known mineral reserves, assay results may not be consistent with preliminary results, alternative sources of energy, aboriginal title and consultation issues, reliance on key management and other personnel, potential downturns in economic conditions, actual results of exploration activities being different than anticipated, changes in exploration programs based upon results, availability of third party contractors, availability of equipment and supplies, failure of equipment to operate as anticipated; accidents, effects of weather and other natural phenomena and other risks associated with the mineral exploration industry, environmental risks, changes in laws and regulations, community relations and delays in obtaining governmental or other approvals.